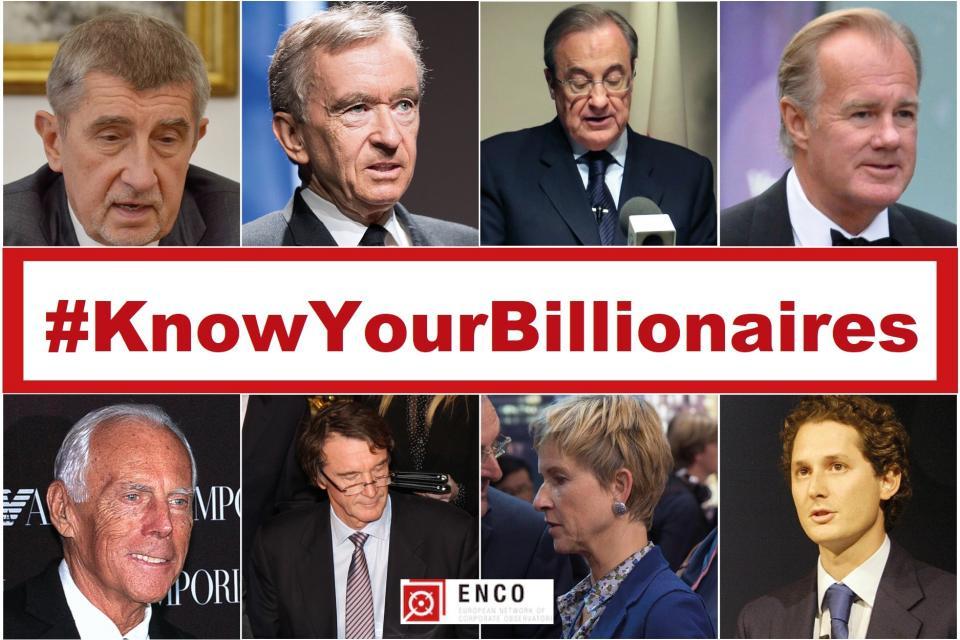 A story about increasing inequality and a weakened democracy.

As group Caso Castor, we have worked on a collaborative report by civil society and media organisations that sheds light on Europe’s richest, how they built their wealth and how they use it.

Tomorrow, February 14th, Eurostat will publish data on GDP growth in the European Union. It is expected around 1%. But growth is a big trap. Apart from colliding with the biophysical limits of the planet, inequalities are increasing, the rich are getting richer and the world has more billionaires every year. Oxfam said in its report on global inequality last year that there was a new billionaire created every two days between 2017 and 2018.

While much more attention was dedicated to the super-rich of the United States, China or even Russia, Europe too has a growing number of billionaires. The report ‘Know your Billionaires’ takes a close look at some of key figures from across the continent. They are linked to some of Europe’s largest corporations, such as BMW, Ferrero, LVMH, ACS or Ineos. Most of them come from the Western part of the continent, although there is a growing number of Eastern European billionaires, who are now increasingly investing in countries such as France or Germany.

The story of how they made their wealth is often also the story of many of the ills of our economic and social systems, which have generated the very problems the Davos Forum claims to address. A story of tax avoidance, financialisation and dishing out of dividends, heavy reliance on public subsidies and tendering, secretive corporate structures, environmental damage or substandard wages and working conditions.

While much has been said about the political role and influence of billionaires in the United States, starting with current President Donal Trump, Europe’s super-rich also wield considerable, and increasing, political influence. They cultivate close connections with political leaders and officials, they spend massive amounts of money in lobbying, they fund political parties (mostly of a conservative or far-right obedience), they own and influence mainstream media… … and sometimes they decide to get into politics themselves, like current Czech Prime Minister Andrej Babiš.

The report “Know your Billionaires” is accessible in English on ENCO’s website and in Spanish in three extended pieces on Florentino Pérez, published by La Marea:

The report ‘Know your Billionaires’ was facilitated by the European Network of Corporate Observatories (ENCO), a network of civil society and media organisations from across Europe dedicated to investigating corporations and their influence. For more information about ENCO and its past reports, check its website.