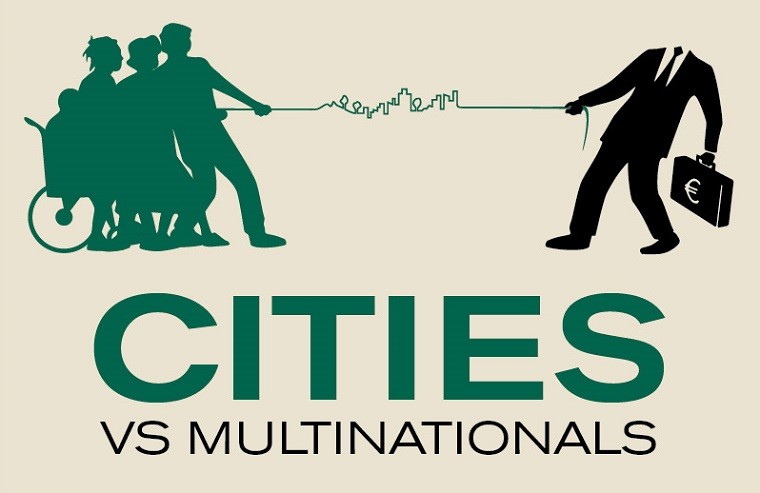 All over the world, and especially in Europe, cities have become a key battleground against the growing reach and power of multinational corporations, argues a new collaborative publication, launched by European civil society and media organisations, part of the ENCO network.

From water privatisation to Airbnb and Uber, from fighting against cars and diesel pollution to promoting a “relocalised”economy that does not leak cash for the benefit of remote shareholders, a battle is brewing in Europe, one that pits cities and citizens against multinationals and financial powers.

This confrontation between cities and multinationals is a reflection of the increased pressures on local authorities and urban spaces since the 2008 financial crisis, including austerity and budget cuts, the financialisation of housing, overtourism that negatively impacting locals, and the targeting of cities by Big Tech and platform companies. On the other hand, cities and their inhabitants are developing a wealth of powerful innovative policies and initiatives to respond to global challenges, develop the local economy, reduce their climate and environmental footprint, and ensure a good quality of life for all.

“Cities versus multinationals” demonstrates that, across Europe, cities and their inhabitants are taking up the gauntlet of progressive social change and climate justice. But it also illustrates the countless obstacles they face when confronting corporate giants, including from the national and EU level. EU rules on public procurement, for instance, are still a major hurdle for attempts to drive local economic development. Airbnb has been able to successfully turn to EU courts in its bid to prevent cities from effectively regulating its operations. To make matters worse, business groups are lobbying the European Commission to impose even stricter limitations on municipal policies. The impact of this lobbying is visible in the Single Market Enforcement Action Plan,which the European Commission presented earlier this week. The action plan includes a new push for the controversial Services Notifications Directive, a proposed law that many European cities fear would curtail their democratic right to regulate corporate giants.