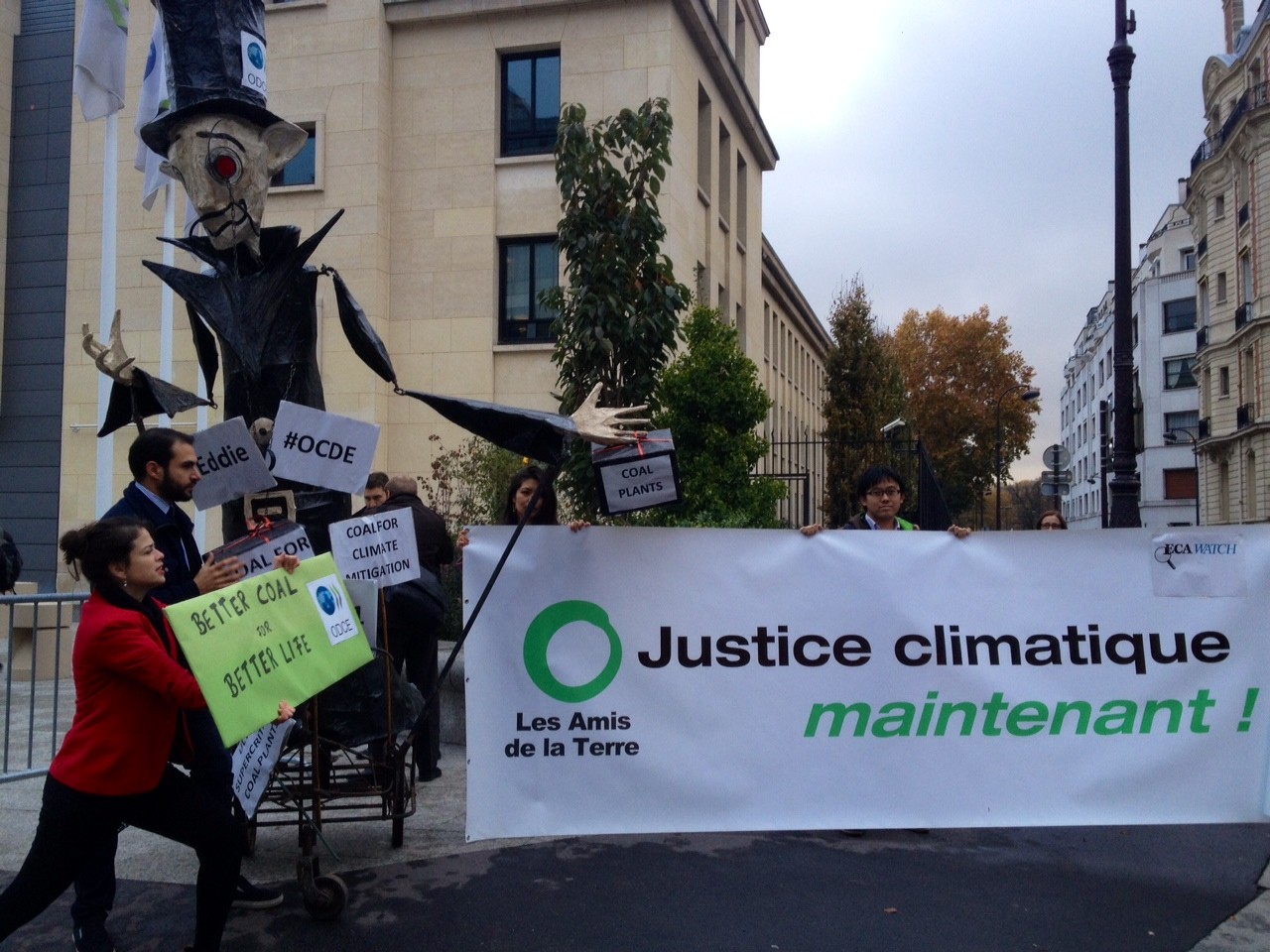 This week in Paris, a secretive body within the OECD will discuss the potential revision of the “gentlemen’s agreement” (1) under which they provide billions of dollars of public financing into the fossil fuel sector through their member export credit agencies.

This morning, prior to a meeting with the OECD Export Credit Group, activists from the Export Credit Agency Watch network (ECA-Watch), including Les Amis de la Terre-FoE France, will protest outside the OECD, calling this public institution to enter the 21st century and end its support for fossil fuels.

“We all know that fossil fuels cause all kinds of mayhem, including damage to environment and to human health, violation of human rights and harm to the global climate.And yet rich countries’governments play a crucial role in supporting  fossil fuel projects through their Export Credit Agencies,. With the international climate summit in Paris in 2015,  the OECD’s moral duty to stop worsening the world’s fossil fuel addiction is even higher: it has to end fossil fuel support if it want to bring something to the fight against climate change””, explains Doug Norlen, Friends of the Earth US, member of the ECA–Watch network (2).

Export Credit Agencies (ECAs) provide governmental-backed guarantees, insurance and loans to private corporations from their home country in order to promote exports and projects abroad. ECA support just for coal, the worst climate killer of the fossil fuels, has been enormous: the OECD ECAs have provided at least 32 billion US$ between 2007 and 2013 for coal plants and mines according to data compiled by the Natural Resources Defense Council (NRDC). (The French government alone, who will host the COP next year, put in 1,2 billion euros to support Alstom exports for just two power stations in South Africa during that time).

“This subsidy stands in stark contradiction to the findings of leading climate scientists. The United Nation’s Intergovernmental Panel on Climate Change made clear that if global warming is to be kept under dangerous levels, the majority of proven fossil fuel reserves will have to be left in the ground” says Lucie Pinson from Friends of the Earth France, as well an ECA-Watch member. The activists want to take OECD’s Secretary General Angel Gurría at his word, who called for every government to consider curbing domestic and overseas support for coal plants.

Today’s reason for the protest is a consultation in the Export Credit Group of the OECD. In this body discussions to consider restrictions on ECA support for coal plants commenced earlier this year with the US, UK and Netherlands proposing to implement an emissions performance standard ruling out future support for coal plants. “However, even this modest move, which focuses only on coal power plants and omits coal mining and infrastructure, is opposed by some retrograde OECD members”, complains Linde Zuidema, ECA-Watch coordinator. “Some OECD governments even dare to propose extended terms (e.g., longer repayment terms) for some kinds of coal plants, which would expand coal use even further. Their domestic coal industry, Alstom, Siemens, or Hitachi, pressures them to put corporate profits above climate, environment and human rights, which is outrageous”, says Zuidema.

Notes:
(1) The Arrangement is a “Gentlemen’s Agreement” amongst its Participants who represent most OECD Member Governments. The Arrangement sets forth the most generous export credit terms and conditions that may be supported by its Participants.
(2) The ECA-Watch network is an international network of NGOs active in the majority of the OECD countries, working on Export Credits Agencies on issues such as human rights, environmental and climate justice, labour rights and anti-corruption.

Too soon to call the EIB the “EU Climate Bank”

ODG at the World Social Forum in Tunis