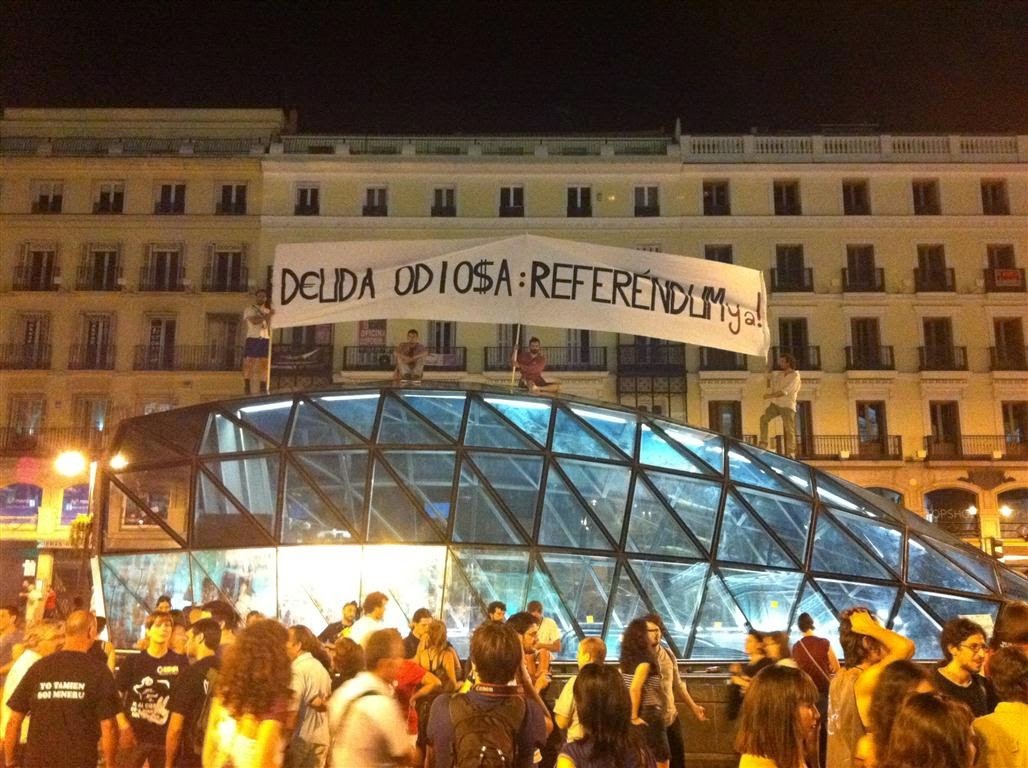 Debt has been a colonial mechanism in many parts of the world. As such, it is a problem that affects sovereignty and should be faced with courage. Any initiative that wants to deepen democracy should establish mechanisms of sovereignty non-negotiable with institutions that do not conform to the democratic principle. Recently, Podemos adopted a resolution entitled “Audit and Debt Restructuring”. The resolution contains interesting points. However, it does not seem willing to address the issue in terms of their effects on sovereignty, democracy and justice, as long as it can relief its burden moderately.

From the outset, the resolution states that Podemos must escape the speech of ‘not wanting to pay the debt’.  The issue of debt is actually treated as an economic issue, which Podemos argues that must be resolved remaining in the euro in any case. With this statements, Podemos seems to avoid antagonizying the global elites making clear that it will not act unilaterally if no agreement is reached. Does this mean that Podemos will be in favour of paying the debt if Spain is threatened or blackmailed with being expelled from the eurozone despite the social and political damage that this would cause? It is hard to imagine how one could reach a beneficial restructuring through negotiation. In cases like Greece in 2011 and 2012 or the highly indebted African countries in 2005, haircuts beneficial to creditors were not beneficial to debtors. The financial elites have shown that they only apply debt relief programs to make debt sustainable, preventing messy and harmful defaults for them.

Something similar happens with Article 135 of the Constitution. PP and PSOE passed an amendment on this article in 2011 to prioritize public debt and interests payments over any other budget line. In March 2014, Podemos was proposing the elimination of this amendment that usurps sovereignty to the citizenship and gives it to the few in power. In the present resolution, the article 135 is not even mentioned. With this, Podemos gives up on denouncing the democratic deficit behind the current functioning of finance which allows the elites to oppress citizens.

In fact, the Citizen Debt Audits suppose a sovereign and democratic mechanism to monitor and decide on the system of public debt without external interference. Podemos’ resolution advocates for establishing citizen audits as mechanisms of transparency and disclosure, but not as instruments to express a mandate from the public. In our opinion, the citizen audits should themselves establish a mandate that the government should apply. The analysis emanating from an audit that combines technical elements with elements of citizen collaboration in the research and the monitoring of the process would allow citizens to decide which debts are illegitimate and should not be paid.

Moreover, the debt restructuring is not enough to combat the consensus of the free movement of capital globally. A negotiated restructuring would not help changing the social model or put the foundations for a solid economic recovery unless profound and unlikely changes occurred abroad. Nor would Podemos achieve a credible bargaining position against financial powers. If Podemos argues that it should not speak about not paying the debt and that anything relating debt has to happen inside the euro, also insisting on the fact that the problem is simply economic but not democracic, Podemos would go to a hypothetical negotiation having shown too much restraint. As history shows, the financial sphere cannot be regulated by negotiation. Financial policies in the 1930s in the US, Europe and Japan, and recent cases such as Malaysia, in 1997; Argentina in 2002 and Iceland in 2010, show that the only way to curb the financial sector is downsizing it and limiting their freedom of action dramatically. Such measures have been implemented by the EU in Cyprus in 2013 and are recommended by the IMF itself in times of financial crisis. These are carried out through state mechanisms. Hence, it is technically incorrect, as was previously said, to treat the issue as a decision that must transcend the state level.

Finally, demanding a debt restructuring without introducing a precedent that sets a new political doctrine concerning the finances of the states would be a huge missed opportunity. The moments in history in which social consensus about policies that have been criticized as radical by the same elites can be changed are those of desperate situations. In them, the credibility of those who have been critical with the current system is increasing, while that of those who have defended the current status quo crumbles because of their aggressions, abuses and lies. It is in these moments precisely in which one should assume risk. And that means showing how certain seemingly hazardous measures are actually essential to establish a real democracy, to which Podemos aspires.

We know we live in a culture heavily influenced by guilt, in which expressions like ‘not paying’ or ‘not working’ cause a negative reaction. However, initiatives like Podemos could help to make sense of the ‘Don’t owe, don’t pay’ that the Platform of Citizen Debt Audit (PACD) has spent years explaining. Other examples such as the PAH teach that cultural dikes imposed from above can be broken, creating greater social cohesion around new causes. This could be done by giving centrality to citizen audits, focusing efforts on explaining that mechanisms to detect fraudulent and illegitimate debts must be established, and that they have a democratic mission similar to other democratic mechanisms to be established. The public could easily understand that this initiative is commonsensical. Gradually other elements should be added to the debate, such as control of financial flows and monetary sovereignty. Time plays in favor of Podemos in this area. If these sovereign mechanisms are not established now, probably they will never be.

Making Of “At the Syrian Border”