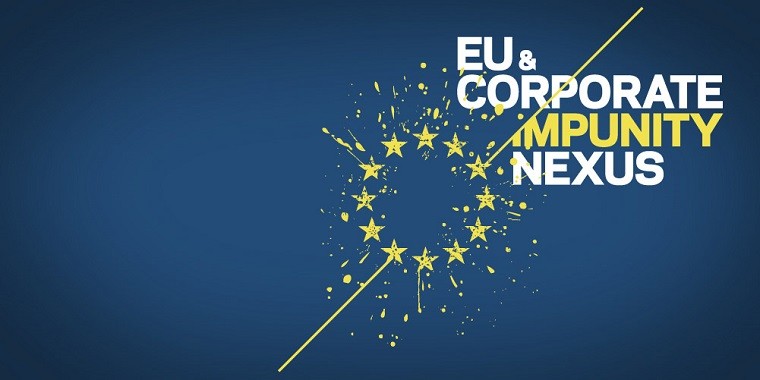 New report of the European Network of Corporate Observatories (ENCO):
THE EU AND THE CORPORATE IMPUNITY NEXUS
Building the UN Binding Treaty on Transnational Corporations and Human Rights.
As the UN Open Ended Inter Governmental Working Group (OEIGWG) convenes to negotiate a long awaited international treaty to address corporate impunity, the European Union has emerged as a key opponent to the introduction of binding regulations for transnational corporations, and a stubborn defender of voluntary norms that have proven to be inefficient and insufficient.

As this report shows, this position is not only a reflection of the pervasive corporate capture of many EU institutions; it also highlights the hypocrisy of European decision-makers and corporate leaders, which are always quick to promote themselves as models of responsibility, while remaining blind to the actual impacts of European corporations all over the planet and to the consequences of EU policies for peoples and the environment.

This ground-breaking report is based on contributions from a large range of organisations and experts from across Europe and the Global South, and was facilitated by the ENCO (European Network of Corporate Observatories) network, a newly-established collaboration of European media and civil society organisations to investigate corporate power. From the lobbying and corporate capture prevalent at EU and UN level to the actual environmental and human rights impacts of European transnational corporations, from the legal mechanisms of corporate impunity to the critique of free trade agreements and investor protection mechanisms, it pulls together different strands of research to provide the full picture of what is at stake in the ongoing UN negotiations around an international treaty on transnational corporations and human rights, as the 4th Session OEIGWG meets in Geneva.

This report demonstrates that in effect, EU representatives are saying exactly the same things, with the same arguments and sometimes the very same words, in this UN working group as international corporate lobby groups such as the International Chamber of Commerce or the International Organisation of Employers: that there is no need for a Treaty since existing voluntary mechanisms are sufficient, that business should be part of the negotiations, and (in spite of the overwhelming evidence that their complex legal structures and their economic and political power often allow them to escape accountability and impose their will on national governments) that transnational corporations pose no specific problem in international law.

This is all the more disturbing since European civil society and the European Parliament have repeatedly expressed their support for the UN process towards the negotiation of a binding international instrument on business and human rights. In addition, legislation is being proposed in several European countries (or in the case of France, has been passed in 2017) to make transnational corporations legally accountable for human rights and environmental abuses. But the EU bureaucracy – represented in this case by the External Action Service – is sticking with big business to defend the corporate status quo.

As this report argues, this attitude of the EU should be seen in the light of the growing corporate capture of democratic processes and institutions, both at national and international level. Transnational corporations are increasingly able not only to prevent any meaningful regulation of their operations, but to present themselves as the only “solution” to global challenges. This corporate capture in European Institutions, which has long been criticised is also increasingly evident in the United Nations system, with the creation of the Global Compact, the increasing dependence on private sector funding, and the growing presence of transnational corporations in international forums supposed to regulate their activities, such as Big Oil in the climate talks. The process of drafting an international treaty to address corporate impunity and access to justice for affected communities and sectors, and the interest it is creating in civil society, is seen as a potential disruption of this increasingly cosy tête-à-tête between big business and governments.

The model defended both by the EU and international corporate lobby groups – both in the UN working group on a binding treaty and more generally as a governance model to address global challenges – is based on three pillars:
– A binding international law to protect the interests of transnational corporations through, for instance, free trade and investment agreements and private arbitration mechanisms;
– The private sector legitimised and invited to “co-write” the regulations that would apply to them, or simply substitute regulation with private non-binding standards through the establishment of “multi-stakeholder forums”;
– Voluntary, non-binding mechanisms for transnational corporations, such as the UN Guiding principles on business and human rights, that give them a “responsible” or “green” image, but make no difference whatsoever in terms of access to justice and reparation for affected communities and workers.

This report includes a collection of case studies (the full version of which is available online) written by experts and civil society organisations from across Europe as part of ENCO, as well as by Global South organisations directly involved with affected communities. The cases show that no matter what European politicians and business leaders say about their “leading by example” on corporate responsibility, European transnational corporations are involved in human rights and environmental violations across the planet and largely succeed in escaping accountability. The emphasis put on the old continent’s “respectability” leads to a disturbing pattern of outsourcing the worse environmental and social impacts of European multinationals and European consumption of resources in the Global South. A pattern that is facilitated if not encouraged by key EU policies such as the pursuit of trade and investment agreements or the focus on carbon permit trading.

Castor & PPPs at the European Parliament