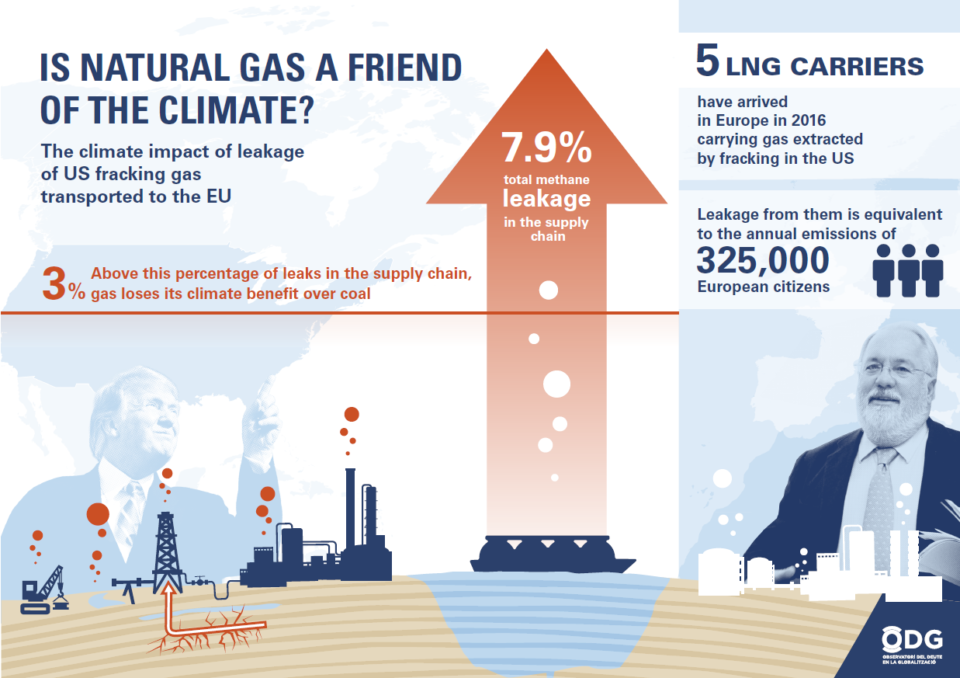 The general objective of this study is to evaluate the climate impacts of the gas supply chain: in particular, those associated with liquefied natural gas (LNG) transits arriving in the European Union and the portof Barcelona.

Over recent years, several international organisations including the European Commission have promoted natural gas, portraying it as a useful transition fuel due to its low combustion emissions. However, this support for natural gas is not supported by a rigorous and independent assessment of its climate impact.

Taking into account that the greenhouse effect of methane (the principal component of natural gas) is 86 times that of CO2, it is clear that methane leakages between extraction and consumption need to be taken very seriously. Renowned scientists including Robert Howarth (Cornell University) contend that in many cases emissions related to natural gas are higher than those related to an equivalent amount of coal.

In the case of LNG, the gas undergoes a complex liquefaction operation at the departure port and is then transported by a carrier, arriving at its destination in a liquid state. This reduces its volume 600-fold, making transits more cost effective. The European cities with facilities to receive LNG carriers are: Bruges (Belgium); Barcelona, Bilbao, Cartagena, Ferrol, Huelva and Sagunto (Spain); Dunkirk, Martigues and Nantes (France); Megara (Greece); Livorno, La Spezia and Venice (Italy); Gargždai (Lithuania); Rotterdam (The Netherlands); Szscecin (Poland); Setubal (Portugal); Haverfordwest and London (United Kingdom) and Aliaga and Çorlu (Turkey).

The Port of Barcelona has one of the most significant regasification plants in both Spain and the European Union, representing 24.67% and 8.18% of total Spanish and European capacity respectively. In 2016, it received 44 transits coming from Nigeria, Algeria, Qatar, Norway and Peru.

From a climate perspective, it is important to analyse what the entry of the US into the export market alongside traditional exporters might mean. The extraction of unconventional gas through fracking increases methane emissions into the atmosphere dramatically. Taking this into consideration, this study quantifies emissions caused by the gas supply chain from US to Europe.