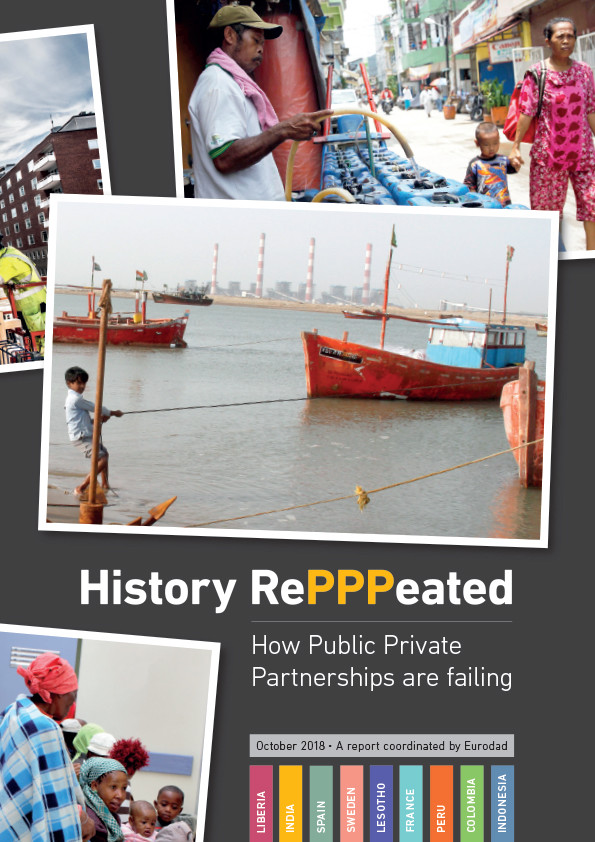 From the complete failure of the Castor Project in Spain, to an overpriced hospital in Sweden, projects financed by the European Investment Bank (EIB) make no exception to the list of PPP disasters compiled in this new joint report.

The report exposes how PPPs across the world drain the public purse, and fail to deliver in the public interest.

History RePPPeated: How public private partnerships are failing, launched on the occasion of the Annual Meetings of the IMF and World Bank, has been written by experts across four continents from organisations including Counter Balance. They expose the negative impacts of PPPs that have often caused misery to local communities.

The report shows that multilateral development banks, such as the World Bank Group (WBG) and the EIB, have played a leading role in providing advice and finance for PPP projects in different sectors. This is despite the mounting evidence showing that PPPs are expensive, risky and opaque.

Maria Jose Romero, one of the report authors and Policy and Advocacy Manager at the European Network on Debt and Development (Eurodad), said: “This report is a serious wake-up call. It is a collection of devastating stories – most of them resulting in national and international scandals in both developing and developed economies alike.

“Last year we launched a campaign manifesto in which more than 150 civil society organisations from around the world called for an end to the aggressive promotion of PPPs. There is overwhelming evidence of the harm they cause. How many more scandals do we need before a serious rethink takes place?”

Some of the main findings are:

The case studies include three projects financed directly or indirectly by the EIB.

For example, the Castor Project in Spain – financed twice by the EIB – features among the PPPs that had to be cancelled due to evident failures, including on proper due diligence to identify the possible impacts of the project. Feted as Spain’s biggest offshore gas storage plant — the Castor project was halted after gas injections caused more than 1,000 earthquakes. Despite never being used, the plant has so far cost the public €3.28 billion, which is currently set to be paid through increased gas bills. To date the EIB never recognised publicly its responsibilities in this fiasco, despite criticisms from the European Parliament and from its own Complaints Mechanism.

The EIB also financed a PPP failure in Sweden, where the construction of the Nya Karolinska Solna (NKS) hospital saw its cost rocket — from €1.4 billion to €2.4 billion — and was beset by technical failures. It is now known as the “most expensive hospital in the world”.

Last but not least, by financing Bridge International Academies Ltd (BIA) through the Novastar equity fund, the EIB contributed to support a client involved in a controversial PPP educational project in Liberia. Indeed, the Liberian government outsourced the lion share of its public pre-primary and primary schools to BIA, but the process was not competitive, local communities were not properly consulted, and there was not full transparency.

Xavier Sol, Director at Counter Balance, said: “The critical findings of this report come at a time when the problematic nature of PPPs is increasingly acknowledged by civil society, but not only. For example,  the European Court of Auditors  has recently published a report also pointing out to numerous failures of EIB-backed PPP projects in countries like Greece and Spain. It is time for the EIB and other institutions to face their responsibilities and work with countries to put in place a transparent, fair and accountable method for financing public services.”

The report recommends that the WBG, the International Monetary Fund (IMF) and other public development banks such as the EIB, together with the governments of wealthy countries that play a leading role in these institutions:

Access the full report including all case studies here.

The risks of Public-Private Partnerships: the case of Renace in Guatemala

Exhibition “Living in a Debtocracy”