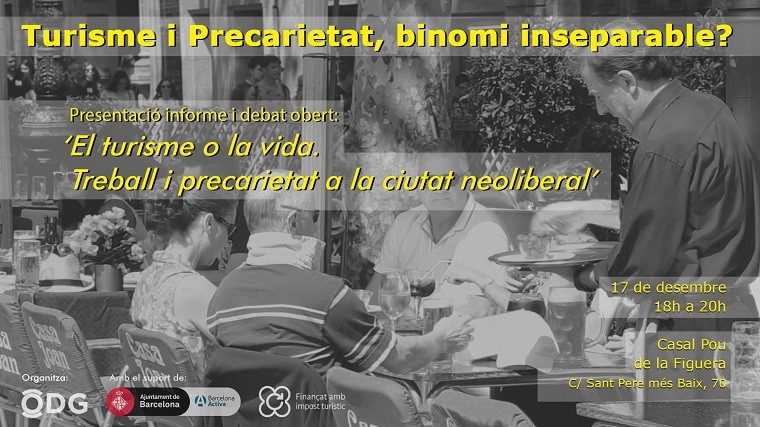 Tourism is sold to neighbours, tourists and investors as a positive industry, generating employment, growth and opportunities. It is true that this moto is increasingly discussed as a result of the harmful impacts tourism has in areas such as housing, environment or the use of public space, a central axis of this industry that is often unnoticed is the precarious labour of people who work in the sector.

Find out about the results of the latest ODG report on precarious labour and tourism, and participate in the open debate where we will collectively  discuss and share about the origin, mechanisms and consequences of a tourism model that is based on the precariousness of its workers.

Next Tuesday, December 17th, from 6:00 p.m. to 8:00 p.m., we are organising a talk-debate about precarious labour and tourism at the Casal Pou de la Figuera (C/ Sant Pere més Baix, 70). In this session we will present the results of the last ODG report “Tourism or life. Work and precariousness in the neoliberal city” and afterwards discuss among and try to understand why precarious labour is particularly pronounced in the tourism sector, the specificities it has, and proposals that stand on the table or new ones that may arise.

The report includes or incorporates the perspectives, criticism and proposals that are the result of a diversity of collective work coming from spaces such as the research group on degrowth promoted by the ABDT or in co-design sessions organised by the ODG itself with workers and other actors like trade unions and social movements, such as the one that took place last June. In addition, the work presented here complements previous ODG work such as “Tourism: the (false) fix“, which made a general approach to the tourism model, or the most recent “The finance takover of the tourism sector“, which explores the financial aspects of the tourism model.

The report makes a brief analysis of the neoliberal economic context -present and historical- and how it affects working people, with special attention to how it unfolds in the Spanish State where the services sector, dominant within the tourism sector, is increasingly important in size and is mostly precarious in condition. In addition, the report focuses into a hot topic, also in tourism, such as sustainability. It makes a critical approach to this concept and the relationship it has with management from the administrations, too often subject to private interests with important influences in public-private organisations such as Barcelona Tourism. In addition, it tries to collect some of the proposals and ideas that come from organised workers and social movements with whom we work to transform a model that makes life unsustainable.

Finally, we would like to add that it is an open session where we expect to have different voices (working people, activists, trade-union members, journalists…) who want to share and discuss the report’s findings, which is intended to help change the hegemonic narrative of the dominant tourism model, putting at the centre the need to make sustainable -and not precarious- the lives of working people ahead of the interests of lobbies, corporations and multinationals.

COP25 has only served to wash the image of polluting companies, compared to the proposals of the Social Summit for Climate

The Trail of the Troika