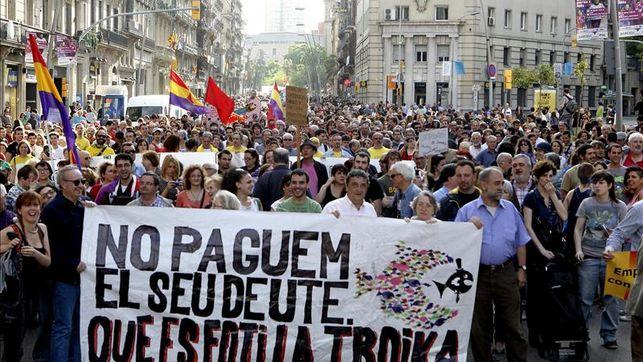 For a new social deal that can transform Europe

Since the awakening of the squares in 2011 the political atmosphere in the Spanish state has changed dramatically. “Frustration, despair and fear, instead of being channelled towards the far right, have gone towards the creation of opportunities to meet other people facing similar situations, support each other and resist.”

This is the fourth piece of a new TNI series of articles: At the crossroads – Europe's social movements respond

Since the financial crisis erupted in 2008, it has taken on ever-greater significance: what was supposed to be only a matter of financial liquidity could end up being a turning point in human history. The crisis in the financial sector became a crisis of state finances, as the financial sector turned on the states that had rescued it and pushed some of them to bankruptcy, like Greece, Portugal and Ireland. These policies – bank bailouts1 followed by austerity2 – are nothing short of looting. They aim to impose the neoliberal model, concentrating wealth by dispossessing citizens.

This is a crisis that has changed its adjective many times, going from financial to economic, to social, ecological and ultimately a crisis of civilisation itself. The indignation with a system that devours people and the environment in this way triggered social revolts, starting in December 2010 in North Africa, then spreading to Europe and the USA. These revolts, known variously as the Arab Spring, the movements of the squares3, the indignados movement, the Occupy4 movement and the 15M5, showed the discontent with what was perceived as a deeply violent, greedy and inequitable global social system. The Arab Spring was born with the Tunisian revolution in December 2010, calling for an end to the dictatorship. The revolt spread to Egypt and other countries across North Africa and the Middle East, with citizens following the Tunisian example by occupying public squares with similar demands. A key feature of these protests was the transmission of outrage through internet social networks.

Before long, similar protests spread to the Spanish state and some Latin American capitals. On 15 May 2011, the squares of these cities witnessed unprecedented demonstrations, which became camps where citizens began to discuss in democratic assemblies what kind of new social order they wanted to see. By autumn the movement had made it to the US, with the emergence of Occupy Wall Street6. This in turn spread throughout the US and to more European capitals.

Discussions in the squares in Europe and the US reflected widespread dissatisfaction with the 'formal democracy' in which we live – the protesters saw it as democracy in name but not in reality, as a tiny few have many privileges at the expense of others. This was summed up in the Occupy slogan “We are the 99%”,7 and in 15M’s “They do not represent us”. In these discussions, proposals were made towards a social project that would deepen democracy in areas such as making public and collective decisions; ensuring accountability; improving transparency; changing the economy to serve us all and better share the generated wealth; ensuring protection, inclusion, education and care for everyone; and creating common spaces in which solidarity can flourish, in ways as harmonious with nature as possible.

With these collective ambitions, assemblies and groups started addressing many of the issues. They mobilised, for example, to defend existing public provision such as education and health, including through platforms for their defence like the Mareas Ciudadanas8 (Citizens’ Tides) as well as initiatives such as Economía Sol9 or Seminari d’Economia Crítica Taifa,10 which looked at more just and functional alternatives to the status quo. On other occasions groups denounced the abuses and crimes in the banking sector, as in the case of 15MpaRato11, which targeted the scams of the rescued bank Bankia, and OpEuribor,12 which focused on investigating and exposing the manipulation of the Euribor interest rate mechanism, used to set mortgage interest rates.

Other platforms, most notably the Platform of People Affected by Mortgages (PAH)13 in Spain and Strike Debt14 in the US, have been dedicated to supporting citizens struggling with oppressive levels of personal debt that they can no longer afford, particularly people who are being evicted from their homes and harassed by banks and collection agencies at a time when many people have no income and no prospects of having one soon. The case of the PAH is key to understanding the present situation. PAH is known for its clever strategy, which combines different objectives and activities. It has promoted the creation of municipal groups (or neighbourhood groups in large cities), where people threatened by mortgages and evictions can gather to express themselves, link up with others and find strategies to resist this oppression. Its resistance to evictions has included physical presence and occupation, which has prevented more than 1,000 foreclosures since the start of the crisis (though this is in a situation where there are nearly 200 evictions every day in the Spanish state). Another initiative has been to occupy bank branches to force them to negotiate, as well as occupying buildings owned by the SAREB (the Spanish ‘bad bank’) to house evicted families – this initiative is known as ‘PAH Social Work’.15

The PAH has also been involved in taking a Popular Legislative Initiative16 to the Congress of Deputies, requesting non-recourse mortgages, the suspension of evictions and the implementation of social renting. Despite getting the support of 1.4 million signatories, the proposal was rejected by the Popular Party government, which instead made slight cosmetic changes to the law that did not solve any of the problems.17 To pressure the politicians the PAH has used escraches campaigns – demonstrations in front of politicians’ personal residential homes and during public events organised by those who oppose their demands – conveying the discomfort of the evicted to them.

The movements against illegitimate public debt

The Platform for a Citizen Debt Audit (PACD),18 formed in late 2011, brought activists with a long tradition of struggles against illegitimate foreign debt in the Global South (such as network members of Quién debe a Quién19 and the Observatori del Deute en la Globalització20) together with those mobilised in the squares and concerned with the current public debt crisis imposed on the Spanish state. This platform took as its reference point the citizen debt audits conducted in Brazil and Ecuador, in which state debts were analysed to see whether their source was legitimate and whether the debts were against the interests of citizens.

The PACD’s aim is to mobilise people to participate in a process of learning basic financial concepts, and from there to study how debt is contracted, demanding transparency and accountability, and finally demanding the repudiation of debts that citizens deem illegitimate. In order to do this, the PACD has been organising a collective process of discussing and elaborating the definition of illegitimate debt. A parallel process aims to develop a method of citizen debt audit to determine the legitimacy or illegitimacy of the Spanish state’s debts, based on previous work by the Commission for the Integral Audit of Public Credit (CAIC)21 in Ecuador.

State debt is not always the easiest topic. To facilitate better understanding, the PACD has produced various materials, exhibitions, pictures and educational videos, explaining how the debt was generated in the recent period. In addition, it has put out technical reports analysing the taxation system, the bank bailouts and military spending and debt. Regular lectures, conferences, press articles and media appearances explain these mechanisms further and promote the campaign for citizen audits and the democratisation of public finances.

Recently there have been campaigns around a consultation of citizens on whether we should pay illegitimate debt (Multiferèndum22), and motions in municipalities against illegitimate debt generated by the Payment to Suppliers plan.23 This has been accepted in several municipalities, marking an important victory in introducing the concept of illegitimate debt into the field of institutional politics. Another important initiative focusing on transparency and citizen empowerment at the municipal level is the Citizens' Municipal Observatories (OCM).24 This initiative, promoted by the PACD and already active in different countries around the world, sees groups of people manage local websites based on free software that publish municipal budgets and promote consultation with citizens. The initiative has just turned two years old and is already active in Girona, Burgos, Lleida, Sabadell, Terrassa and Castelldefels among others.

The citizen debt audit movement is spreading across Europe and in some states of North Africa. These groups form the International Citizen Audits Network (ICAN),25 and meet regularly in meetings such as the one held recently in London. They also regularly communicate online to share work and organise joint campaigns. The network includes ELE in Greece, Anglo no tour Debt in Ireland, Debt Resistor UK and Jubilee Debt Campaign in the United Kingdom, Initiative Audit Cidadã à Divide Public (IAC) in Portugal, Le collectif pour un audit citoyen of dette publique (CAC) in France and many others.

Today, the confluence of all these movements is showing the lack of legitimacy of the system. The level of mobilisation, resistance and awareness in the Spanish state has made it difficult, for example, for the extreme right to get a foothold in the way it has in other European countries where mobilisations have not been as strong. Frustration, despair and fear, instead of being channelled towards the far right, have gone towards the creation of opportunities to meet other people facing similar situations, support each other and resist. This has been accompanied by the elaboration of a discourse that allows for a better understanding of the causes of the current social problems, and the people who are really responsible. All of this work helps in overcoming loneliness and fear, generating collective strength to resist and transform reality in the right direction. It avoids searching for scapegoats that serve to divert attention away from the political and economic elites, channelling fear and anger towards the weakest as fascism does.

The political mobilisations question the bipartisanship that is entrenched in the non-participatory parliamentarism that spans all European democracies. The legitimacy of the Spanish regime is also questioned from Catalunya by the independent left represented by the CUP26 (Popular Unity Candidates) and Procés Constituent27 (Constituent Process), which pursue emancipatory self-determination and the separation of the Catalan countries from the Spanish state to develop a more just social project. New political options, such as Podemos28 (We Can) at the state level and Guanyem Barcelona29 (Let's Win Barcelona) at the municipal level, are powerfully entering the landscape of institutional politics with the ideas and methods that emerged from the squares, and thus can be counted as alternatives that allow us to be optimistic.

The Spanish state is now a symbol of this time of uncertainty and inflection. Its regime, made up of a monarchy underpinned by a dubious constitution and discredited bipartisanship, is faltering. Currently the political and economic elites are trying to install a new king, Felipe VI, while maintaining the current democratic deficit and making small changes to the regime to allow it to present a more acceptable face. This is a desperate move to try to slow their eventual fall, and the crystallisation of protests in recent years. In this window of opportunity, we must be louder than ever if we want the dreams of the squares to become the new reality.