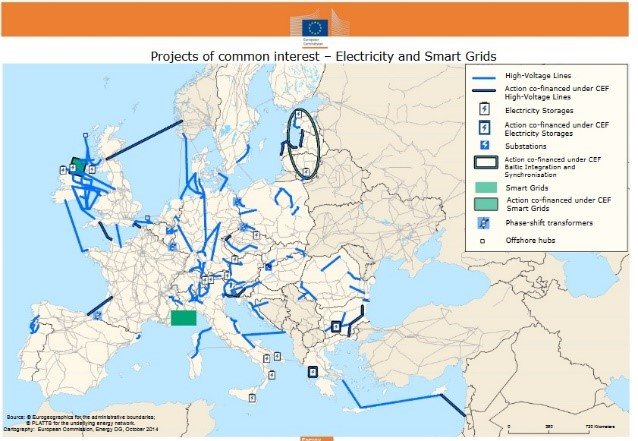 Geostrategic games under the goodwill umbrella of the European Commission

“The end of Cyprus energy isolation; security of supply; an increase in the share of renewable energy; the creation of socio-economic benefits (…)”[2] and so on and so forth. Those are only some of the official advantages the so called ‘EuroAsia Interconnector’ will bring along, says its promoter EuorAsia Interconnector Ltd. The energy infrastructure project shall create a reliable alternative for European energy transfer by extending the energy market via a cross-continental connection between Europe and Asia. It comprises the electricity interconnection between the grids of Israel, Cyprus and Greece through a 1520 km long subsea (400kV) DC cable and with HVDC onshore converter stations at each connection point. Under the working title 3.10. this ‘energy highway’ has been recognized as a Project of Common Interest (PCI) in 2016 by the European Union (EU) and hence became eligible for European funding programs based on public money.

Qualification and justification for its titling as a PCI, which indicates improvements in the energy market for all citizens, stems from its apparent socio-economic benefits. Those would not only comprise the ending the energy isolation of Cyprus, as last EU member state remaining energy isolated so far, but also provides an energy line through which the EU can securely be supplied with electricity produced by the gas reserves in Cyprus and Israel as well as from the available renewable energy sources, contributing at the same time to the completion of the European internal market. The official promoter website further states the project would offer “[…] significant economic and geopolitical benefits to the involved countries, contributes to the target of the EU for 10 percent of electricity interconnection between member states, and provides significant socio-economic benefits at the range of €10 billion.”[3]

The main question, rising from the sugarcoated argumentation is, however, who truly benefits from this type of infrastructure project and in how far public funds can be justified to serve as driving investment and back up for them?

With view to the projects level of development, rapid progress in planning, permitting, administration and regulation, typical for PCI’s, can be observed. Final investment decision had been made in December 2016, the engineering design study, that has kicked off in June 2017, is currently conducted and will be completed by December 2018. Construction is expected to start by November 2018 and shall be completed by December 2020, when the project is planned to be commissioned.[4]

In the development of the ‘energy bridge’, project owners clearly benefit from financial support of the EU that shall stimulate further investments from the private sector. The Interconnector, is one of the seven selected electricity projects, and the only North-South electricity interconnection in Central Eastern and South-Eastern Europe Priority Corridor (NSI East Electricity)[5], that have been approved for funding by the European Commission. It was selected under the second 2016 Connecting Europe Facility (CEF) call for proposals, under which a total of €5.35 billion has been allocated to trans-European energy infrastructure for the period 2014-2020. The financial injection of the CEF is dedicated to two compulsory studies – the preliminary technical and environmental as well as final the pre-construction studies – conducted during the initial stage of the project.  The technical and environmental studies were co-financed with a €1.3 million EU grant[6] and have been completed in 2016. In the next step the final pre-construction studies were funded with a €14.5 million grant,[7] to finalize the interconnector’s design and to procure the associated works contracts.

Main parts of the project, however, are financed and developed by DEH/Quantum Energy Ltd., a joint venture established in 2011 and consisting of Greece’s Public Power Corporation (PPC), Cyprus’s Quantum Energy and Bank of Cyprus as a minority shareholder. From Asian side, the government-owned Israel Electric Corporation (IEC) is involve as project partner. But investment interests have reached out even beyond directly involved nations. As emerging – and meanwhile throughout strategic- global player, even China’s interest has been raised recently, with an agreement between Greece’s PPC and China’s State Grid Corporation of China (SGCC) for the latter’s acquisition of a 24 percent stake in the power grid operator IPTO, a PPC subsidiary, that is expected to provide further financial support for the Interconnector.[8] Worth to be mentioned at this point are recent investments in generation capacities of countries and shareholders involved. The discovery of vast natural gas deposits in the eastern Mediterranean Sea within Cyprus, the Israeli and Egyptian maritime zones that are expected to be on stream by the end of the decade were definitely an important driver not only for the construction of gas pipelines but for the initiation of an energy transmission line. [9] The increasing gas fueled electricity capacities of Israel and Cyprus as well as DEH’s investments in own power plant capacities in Southwest Europe have to be connected to a profitable market, even better if this is partly done with public money. That an increasing use of natural gas, a resource of fossil fuel, will not contribute to an increase in the share of renewables seems to be negligible when blended by all of these sweets.

According to the project promoter, the total costs of about €1.5billion will be recouped in about four years, while it is expected to earn about €17.5 billion throughout the life of the cable.[10] Let us be very hypothetically and pose the question of failure: Guess who will not be refunded? Correct, society.

The EuroAsia Interconnector can be regarded as an exemplary case of how public money is spent for projects offering benefits for the common at the first glance but in the end laying the ground for economic actors to play their geostrategic games. Further actors, such as the U.S. as ally of Israel, their interests and project’s consequences have not even been mentioned here.

Transparency is a well-respected issue in a project development like this, however, seems to have limitations to the point that costs and risks carried by the general public are not worth to be displayed in the same amount than its superficial benefits.

To sum up, we cannot clearly say who, why and in how far is taking advantages from these types of mega infrastructure projects, but we can have a closer look and investigate in relations that are not as obvious as officially stated. Rising awareness and education of the public are first steps for protest and change.