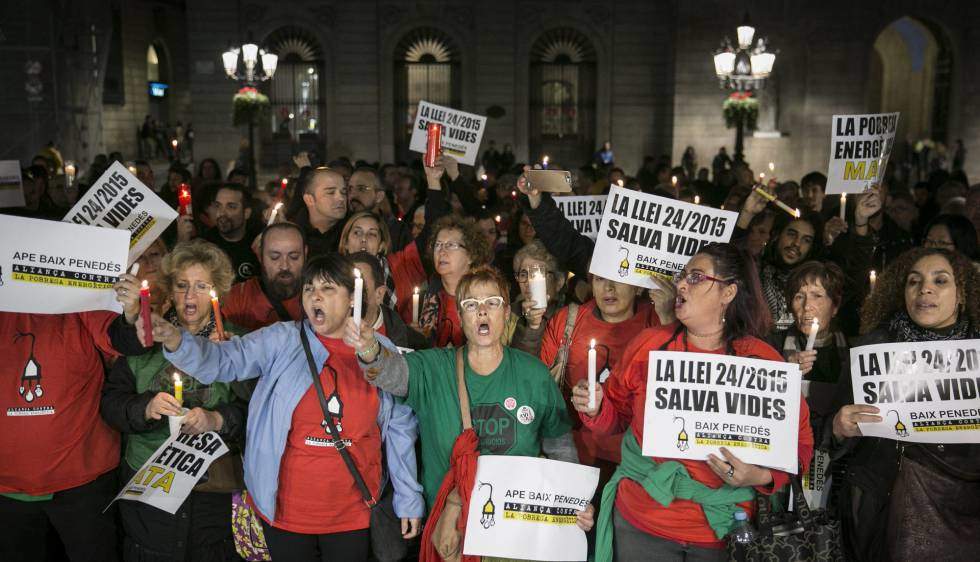 The water company Agbar, part of Suez group, victimises three activists for an action taken last February, attempting to undermine the fight for the right to basic supplies.
Barcelona, May 7th 2018
The Alliance Against Energy Poverty (APE) has worked since its inception to stop water and energy supply cuts in Catalonia, and have confronted the large multinationals of the water, electricity and gas sectors to demand access to water and energy as essential rights. Together with the PAH and the Observatory DESC, as well as many other entities and groups, we have worked to promote and win a law that has stopped more than 40,000 supply cuts in Catalonia. We have located the supply companies at the center of the problem, pointing to these companies who enjoy multimillion benefits, as responsible for a scourge that affects more than 10% of the population in Catalonia.
As of today, Aigües de Barcelona (Agbar-Suez Group) has decided to bring to trial three APE activists for a protest action that took place at its commercial offices in Barcelona on February 27th. With this action, Agbar intends to victimise those who defend the rights of citizens, and choose to repress organized civil society.
The company is taking legal action against APE for an action taken in pursuit of debt relief to vulnerable families (more information). This action was part of a campaign beginning in July 2017, which demands the total relief of debts for unpaid water bills incurred in the cases of vulnerable customers. In some cases, debts exceeded €1,000. Aigües de Barcelona, ​​instead of responding to the request for debt relief, make periodic reminders about non-payment to indebted customers. In response, APE took action to find a solution to the accumulation of these debts. On the day of the February 27th protest, the representatives of the company, among them their Client Director Núria Latorre, told us that APE’s demands were impossible to fulfill.
Ten days later, some of the affected people who requested the debt relief, as well as thousands of families in Barcelona and other municipalities in the area, received a letter from Aigües de Barcelona that confirmed the relief of most of their debt. For example, there were debts of more than €1,000 reduced to €98 (more information).
APE is very clear that it was the action of February 27th that won this debt relief. This shows that our demands were not only legitimate but possible to implement, and that it was only the company’s unwillingness to find a true solution for vulnerable families that had previously prevented action. APE has once again demonstrated the importance of citizen organization in pursuit of basic rights through actions of protest and peaceful disobedience. In response, despite having accepted part of our demands, Agbar has chosen the path of legal repression and victimisation to spread fear among activists and those who cannot afford the most basic services.
Even though judicial decree only included one person in the accusation, Agbar asked the court to sue two more activists. Among the proposed activists to be sued by Agbar, is movement spokesperson Maria Campuzano. This sees Agbar seeking a greater impact on the group, and to demonstrate their dominant position. It is outrageous that Agbar, who have the incomprehensible privilege of managing water in a city like Barcelona, have spent millions of euros in recent months in an advertising campaign that aims clean up their tarnished image, and in judicial processes to try to undermine civil society groups organized to defend their rights.
As APE we want to make clear that Agbar’s repressive actions will not stand in the way of our fight for the rights of vulnerable citizens and families, in pursuit of guaranteed access to basic supplies. For this reason, from today and until the day of the trial, scheduled for May 16th, we begin a campaign to draw public attention to the case, to make clear what the “responsible management” of Aigües de Barcelona really means. Several organisations and groups with which APE has been collaborating since its inception share indignation for the belligerent attitude of the company against the defense of fundamental rights by signing this statement and supporting the campaign that launches today.
The defense of fundamental rights and the right of citizens to fight for what they consider not only fair but necessary, can never be at the mercy of what is best for large companies to continue expanding their profits. The right to basic supplies is not under negotiation, nor will our work stop in the face of the criminalisation of protest. We are not afraid of the repressive strategy of Agbar, our rights should not be prosecuted. We will continue to fight with the rest of the organisations and groups that accompany us, as we have always done, to end the abuses committed by big utility companies and to win a country WITHOUT THIRST, COLD, OR DARKNESS!
#EncausadesPerAgbar.