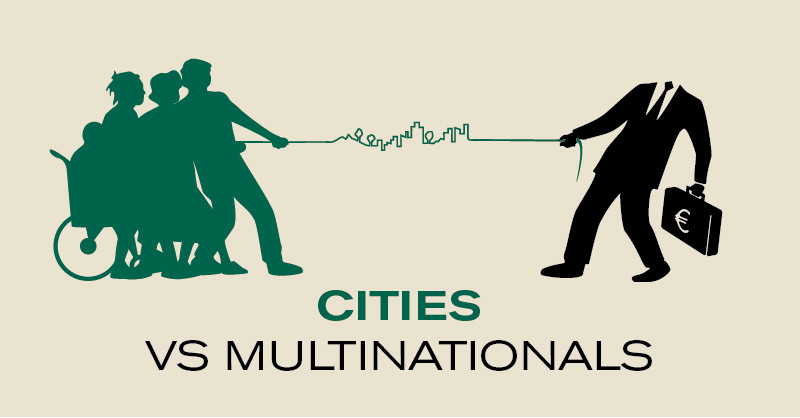 From water privatisation to Airbnb and Uber, from fighting against cars and diesel pollution to promoting a “relocalised” economy that does not leak cash for the benefit of remote shareholders, this groundbreaking publication, facilitated by the European Network of Corporate Observatories (ENCO), offers a comprehensive look at the critical confrontation between cities –progressive municipalities and social movements– and corporate power all over Europe.

Our plans for launching this publication were interrupted by the Covid-19 crisis. This interruption provides us with an opportunity to reflect on the developments of the past weeks and months, and on how they bear on the core argument of our publication: that cities have become a key battleground in the fight between democracy and corporate power. Local governments have been left dealing with the consequences of austerity, privatisation and a destructive economic model without the resources to do so. Cities are increasingly targeted by international financial capital investing in real estate, tourism or digital services, with increasing negative impacts for their inhabitants. At the same time however, progressive councils and urban social movements are increasingly taking up the gauntlet of social change, economic resilience and climate justice.

The importance of care and collective services and its often poorly treated workers has been visible to all during the confinement periods. In countries such as Spain, France and Belgium, private elderly care homes have been the focus of public scandal in relation to the gross mismanagement of the epidemics, reinforcing the case made in Blanca Bayas’ contribution to our publication for remunicipalising the public services of care that nurture life in cities, based on a commons-public partnership model, explained by Laia Forné. The virus has often struck harder in poorer neighbourhoods, where living conditions in cramped apartments did not allow for social distancing, and where the workers that were called upon to cater for everybody’s needs during the confinement (deliveries, supermarkets, collective services etc.) mostly live.

The crisis has also exposed the risks of unchecked dependence on the private sector and on delocalised and globalised supply chains for essential goods, services and equipments; a model designed and pushed by multinationals. Evidence suggests that the circulation of the virus was directly facilitated by some of the ills of corporate globalisation, such as massive deforestation, industrial farming and air pollution. All of a sudden, there is an invigorated debate about sovereignty and independence, but that might soon translate into just more handouts to private companies to secure supplies or buy their allegiance, as we see in the pharmaceutical sector. In “Cities versus multinationals”, we present several interesting models for relocalising the economy and building genuine community wealth, one that benefits both people and the environment, starting with the “Preston model” in the UK, municipal-led food production systems in France or the use of tendering by many cities in Europe to foster values of social and climate justice.

Most important perhaps are the aspirations for change and the energy revealed by the crisis. In many cities, local councils, groups and citizens have stepped up to protect the most vulnerable, invent new forms of solidarity, create local supply systems. The confinement has demonstrated that another way of living and working, another economy that works for people and planet and not only for corporations, is indeed possible. Large retail chains and online retail giants such as Amazon have sought to cash in on the crisis. Fortunately the opposite trend has also been true, with people switching to local, small retail, organic food producers, and the social and solidarity economic sector during the crisis. Councils and governments have taken hitherto unimaginable policy steps such as halting evictions, providing shelter to homeless people or women victims of domestic violence, directly supporting local businesses and cultural activities, changing transport and mobility rules, growing food for poor families in public parks, and so on.

After the epidemics, many wonder about the future of cities, and whether they will not be deserted by the rich and increasingly mobile workers afraid of social promiscuity. The future of cities will depend on how much of these efforts will endure. In planning for the “deconfinement”, cities across European are seeking to create more space for pedestrians, cyclists, cafeterias and restaurants and closing streets to cat traffic, in a bid to support quality of life and local economic activity. They have ramped up their support to local businesses (which might run in contradiction to the single market and free-trade regimes favoured by the EU), or even pledged to build more social housing. In Barcelona, the Solidarity Economy Network XES (featured in one of the chapters of our publication) has developed its own ‘Solidarity Economy Action Plan‘ to address the sector’s difficulties with Covid-19 and propose measures to shift public policy and promote a new productive local matrix. In all of these ways, the crisis might have accelerated some of the changes which progressive cities have been trying to introduce for many years.

No coming back to “Normal”

No wonder that today, as the crisis subsides, governments and business players are trying to rush us back to business as usual, with a focus on “reopening” for investors and tourists, and urging us to go back to work and consume even harder than before to stave off an economic crisis. Some are even using the crisis to push further pre-existing corporate-driven agenda, such as the “digitalisation” of the economy and of labour.

Our publication exposes the lasting impacts of the 2008 financial crisis and its aftermath in (mostly) the European periphery. An increasing worry is that we should not repeat the same mistakes yet again: massive public spending to bailout corporations, and severe austerity imposed on people in form of reduced public services and limited social rights, particularly for the most vulnerable. This was one of the direct causes of the rise of progressive municipalities in Europe, particularly the Spanish ‘cities of change’.

The Covid-19 crisis has exposed the dire consequences of the post-2008 fiscal policies imposed by the Troika (European Commission, European central Bank and the International Monetary Fund) and the European governments, and the need to invest in public services. The severity of the situation has forced, for the first time, a loosening of austerity at EU level, including of some of the constraints imposed on local authorities, as described by Yago Álvarez in the publication.

The mayors of Amsterdam, Barcelona, Milan and Paris ‑ following up on a similar call by the mayors of Spain’s largest cities – have urged European governments to “learn from the 2008 crisis and its austerity-based response” and focus on public investment: “the actions taken after the coronavirus crisis must be based on solidarity and socially-oriented principles that will help people, public services and companies recover and strengthen”. They have called in particular for direct access to EU recovery funding. A joint position paper to that effect was launched during the crisis by the cities of Bratislava, Budapest, Prague and Warsaw, which were joined by 20 European cities including Paris and Barcelona. If these efforts bear fruit, the crisis could lead to a rebalancing of power within the European Union in favour of cities and local councils, potentially loosening the grip of budget and market rules designed to favour corporations.

The crisis has released new energy and opened new windows of opportunity. The new policies and models developed by progressive councils and urban movements in recent years in confrontation with corporate power are more relevant than ever, and could even gain traction at a larger scale. But we also know that corporate and financial power will also seek to benefit from the crisis and protect their power at all cost, as they did ten years ago. The fight between cities and multinationals goes on. It’s up to all of us to make sure that it ends with deepened democracy, strong public services and an economic system that ensures a lively future.

Too soon to call the EIB the “EU Climate Bank”