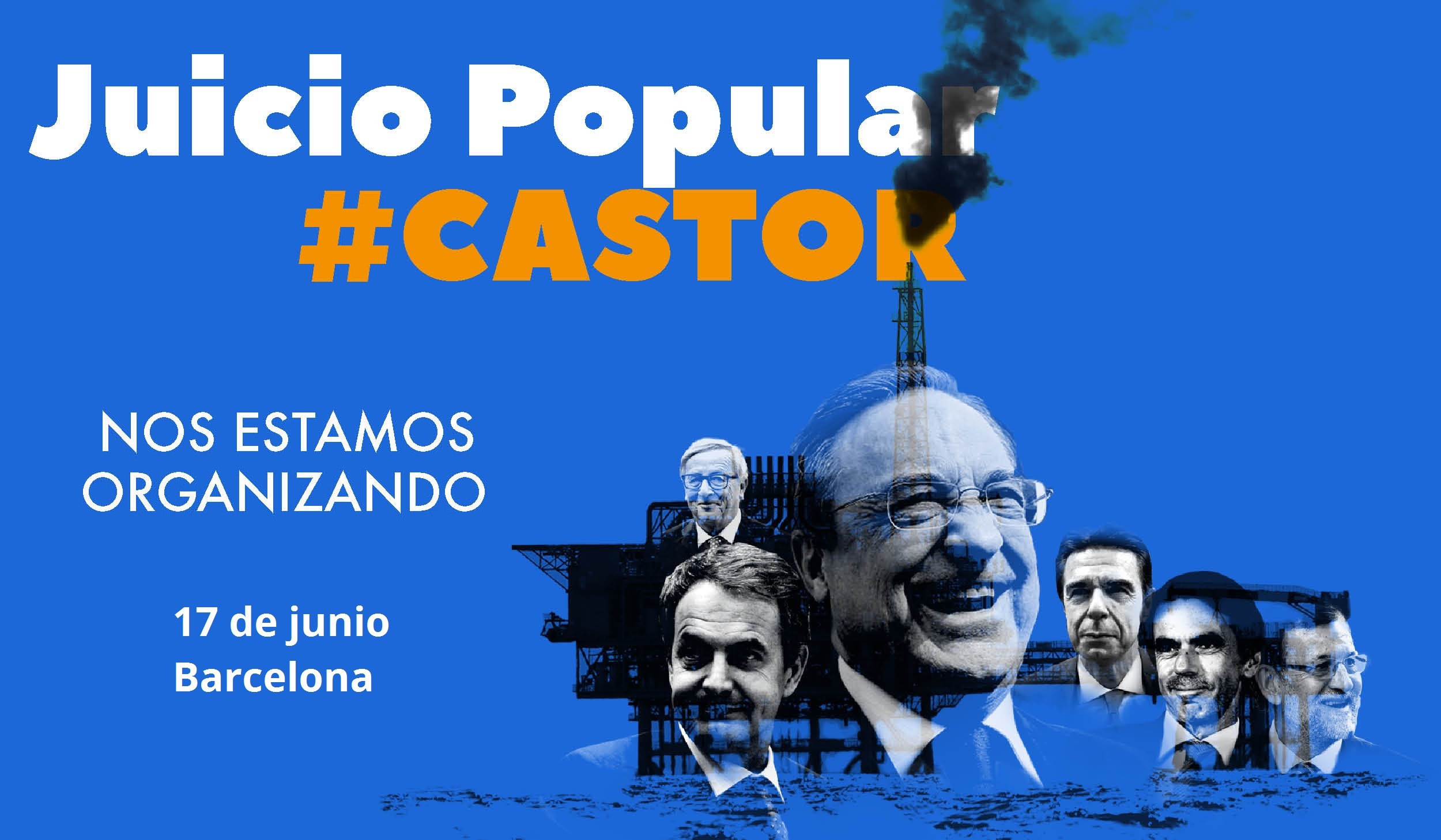 Faced with impunity, the citizens accuse.

You can join as an organisation or individual through this form.

The Castor project -a geological gas storage offshore in the Mediterranean-, granted to ESCAL UGS (66.6% participated by Florentino Perez’s ACS) by the PSOE government, hibernated its activity in 2013 after causing 1,000 earthquakes that shook the population of the Sénia territories (in Catalonia and Valencia). Subsequent to the disaster, studies done by Spain’s Geological and Mining Institute and the National Geographic Institute corroborated the cause-effect relationship between gas injection in the marine plant and earthquakes. However, the PP government allowed ESCAL UGS to present its renunciation in exchange of an exorbitant compensation of 1.35 billion euros paid in less than 40 days, in a context of major social cuts in Spain. To this day, the facilities are still standing, and although they are hibernated, there is no dismantling calendar. Nobody is being held responsible for the disaster and, instead, citizens have had to assume a debt that will amount to more than 3.4 billion euros, which is already being paid since January 1st, 2016 through the people’s gas bills.

Since 2007, the Citizen Platform in Defence of the Sénia Territories has alerted of the socio-environmental dangers of this project. It has tirelessly denounced different procedures, permits and controversial practices throughout the process and has thus done a task of information, citizen control and active participation that the institutions and the promoter company have ignored and belittled from the start. Since 2013, and since the European Investment Bank’s entry into the picture, the Debt Observatory in Globalization (ODG) has also warned of the risks of refinancing the project through Project Bonds, of the financialisation of this infrastructure and of the potential generation of illegitimate debt that would end up being payed by the population. After the disaster and the compensation, public opinion has also shown disapproval, but remains a victim of misinformation, and the slowness and complexity of the case.

In spite of the open judicial process open in Vinaròs Court no.4 -where an investigation is in course judging environmental prevarication and crimes against the environment and against natural resources-, there is no guarantee for the population that past situations will not be repeated, nor that the main responsible, “the big fish”, will be held guilty. Faced with impunity, and almost 4 years after the earthquakes, the entire population affected by the social, environmental and financial impacts of the Castor project, and especially the population of the territory that suffered -and continues to suffer- its consequences, deserves a fair trial. It is for this reason that on June 17th, 2017, various civil society organisations are launching a Peoples’ Tribunal on the Castor project, to denounce and judge these events and accuse those responsible, with the urgency, rigor and transversality that this case requires.

The realisation of a Peoples’ Tribunal on the Castor project arises as a need for organised civil society to collectively guarantee their rights and recover their dignity, with the aims of:

1. Listening to the citizen voices involved and including the territories’ historical memory, to prevent the case from falling into oblivion;
2. Making a balance of the path already walked, as well as giving value to the actions carried out by organisations such as the Citizen Platform in Defence of the Sénia Territories over these years, and the Association of Affected by the Castor platform in recent times;
3. Exercising citizen control; demand responsibilities and point out negligence in the case of the Castor project in the Sénia territories, as well as the dismantling of the platform;
4. Denouncing, in short, the violation of fundamental rights with local, state and global consequences, demanding the exercise of popular sovereignty.

In order to do so, we believe it is important that the People’s Tribunal is carried out in the terms that citizens consider and decide on, outside connivances and servility; presenting principles and criteria that are not exclusively legal; and extending the scope of accusation beyond the impacts of the Castor project in the Sénia territories.

Those we point at for the social, environmental and financial disaster that the Castor project has been (and continues to be) and, therefore, those we will sit on the trial’s accusations dock, even in the case they decide not to turn up, are:

1. The company ESCAL UGS/ACS (Construction and Services’ Activities) and, in an aggravated manner, its president Florentino Pérez,
ACCUSED of the construction of the Castor project, where earthquakes are only the tip of the iceberg of a chain of environmental, social and economic crimes at local and global level, such as the debt generated, as well as other cases of imposed and useless mega-projects in the Spanish state and around the world, especially in global South countries.

2. The Spanish Government and the Ministry of Industry, Energy and Tourism,
ACCUSED of environmental prevarication, mismanagement and concealed state assistance. Specifically in relation to concealing relevant information on the Castor project, and not guaranteeing the population’s right to information; collusion with the company (having accompanied and approved oversized costs for the project, and guaranteed the company’s compensation through the contract’s clauses), instead of guaranteeing public interests.

3. The European Investment Bank,
ACCUSED of environmental prevarication, generation of illegitimate debt and financing the current gas model. Specifically in relation to making the Castor project’s refinancing possible through issuing bonds, and to financing other gas infrastructures in Europe with the same logic and impact.

The Peoples’ Tribunal will give voice to testimonies such as the Citizen Platform in Defence of the Sénia territories and the Association of Affected by the Castor Platform; who will testify before the Tribunal in relation to the opacity, the lack of citizen participation and the social and environmental impacts of the Castor project. There will also be various expert reports on the geological and environmental fields, as well as on procedural law and on the impacts of financialisation and the major infrastructures promoted by the European institutions. The aim is to explain the gas industry model represented by the Castor project, as well as the economic and social impacts it has on the environment and the people. Finally, people from communities in the global South affected by ACS’ projects will be given voice to testify on the impacts this company has outside the national borders and on its action logic.

The verdict and sentence will serve to continue influencing institutions (local, Catalan and state levels) and other stakeholders, such as ACS and the European Investment Bank. It is urgent to continue working for the dismantling of the Castor project’s facilities, among other demands of local people. So is the fact of being able to revert the current situation of illegitimate debt that amounts to more than 3.4 billion euros, falling on the citizens’ shoulders.

We will demand justice, reparation of the damage made, and the guarantee of non-replication of this model that socially, environmentally and economically indebts us.
We do not want more Castor projects; so that history doesn’t repeat itself, anywhere.

This is expressed by the undersigning entities, which call on all citizens to be part of this accusation and to attend the People’s Tribunal on Saturday, June 17th in Barcelona.

You can join as an organisation or individual through this form.