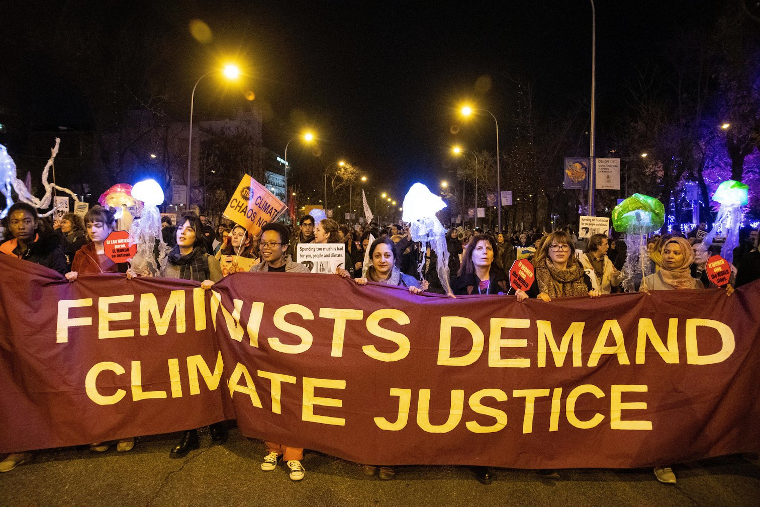 The European Green Deal falls far short of the demands being put forward by feminist, Indigenous and Global South movements. Here’s how to bridge the gap

In response to the COVID-19 pandemic, governments around the world are turning to ‘Green New Deals’ as a win-win solution to both economic crisis and climate catastrophe. Nowhere is this more apparent than the all-encompassing European Green Deal (EGD), launched by the European Commission to bring the continent’s carbon emissions down to net zero by 2050.

One might assume that the environmental movement would be happy with this policy initiative, but since the EGD’s launch it has been met with fierce criticism. The ecosocialist Daniel Tanuro has argued that US President Roosevelt’s original New Deal, upon which Green Deals are conceptually modelled, was ultimately aimed at maintaining social order during the Great Depression and thereby upholding the capitalist status quo. In the same way, many are challenging the new wave of Green New Deals for not questioning the fundamental structures of our existing economic model.

How green is ‘green’?
The psychologist Abraham Maslow once said that “if all you have is a hammer, everything looks like a nail”. The European Green Deal embodies this maxim. The hammer is the market and the nails include growth, debt and financialisation.

Criticisms of the European Green Deal generally fall into three categories. The first is that the European Deal clings to the idea that absolute decoupling of economic growth and environmental impact is possible. In other words: the plan assumes that we can achieve ‘green’ economic growth at the same time as dramatically reducing CO2 emissions. Absolute decoupling can be made to work on a regional level by outsourcing polluting activities, but there is no evidence that this can happen on a global scale. For example, the European Commission claims that between 1990 and 2017 emissions decreased by 22% while the economy grew by 58%. What it fails to mention is that over the past two decades, imports from China have quadrupled from €90bn in 2002 to €420bn in 2019.

The second criticism is the plan’s blind faith in technology. Renewables are without a doubt a huge improvement on fossil fuels, but they lock us into multiple dependencies on scarce raw materials. This could lead to a shortage of lithium, cobalt, nickel and other rare earth metals by 2050 – elements that are mainly concentrated in the Democratic Republic of Congo, Argentina, Chile, Bolivia, Indonesia, the Philippines, Australia and China. This would cause severe impacts for those communities suffering under extractivism.