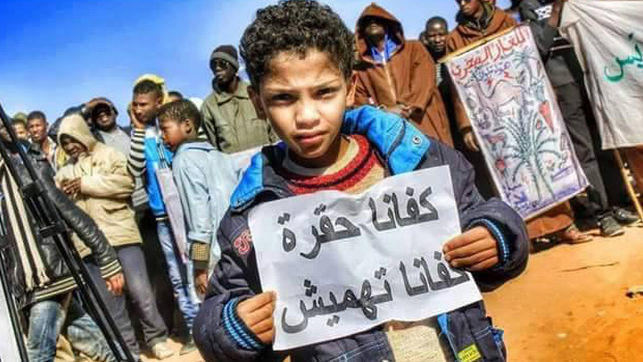 For refugees, the borders of Member States are shutting down and becoming impenetrable walls. However, for energy security, the borders are extending further and further, gathering territories in a clear exercise of energy neo-colonialism.

If we speak of the cause of the refugee “crisis”, we ought to broaden the focus and include a wider view, both in geographical space and time. Only by doing so will we be able to construct a story that brings us closer to the reality of those peoples on the southern shores of the Mediterranean, and help us to radicalise solidarity with their current situation and suffering.

I’ve lived many years of my life on a background of blue: the Mediterranean Sea. For me, it is a place to breathe deeply, to think and reflect, a place of relaxation and freedom. But now it has become a place of death, a slow, painful, agonising death and one that is profoundly unjust.

The information about the so-called refugee “crisis” comes to us in Europe through articles that reduce a hugely complex story to a few photos. Mass media communications concentrate their efforts on showing the consequences but avoid the deep analysis of the causes. Unfortunately, they show the situations of the northern and southern Mediterranean as far away, separate and unconnected. There is nothing further from the truth. We have numerous connections in Northern Africa and Western Asia (NAWA) for example, because of our high dependency on their natural resources and, in particular, on their energy supplies. The EU imports oil from countries like Russia, Norway, Saudi Arabia, Libya, Iran, Nigeria, Algeria, Iraq, Kazakstan, and gas from Russia, Norway, Algeria, Qatar, Nigeria, Trinidad and Tobago and Egypt. Both oil and gas are two vital energy sources for a Europe that needs to import fossil fuels.

In spite of the historic Russian dominance in the supply of oil and gas, the increasing conflict between the Russian Federation and Ukraine has been the justification and excuse for Brussels to talk more than ever about energy security. The huge dependency on Russian imports gives Russia a great deal of power when dealing with the Member States, and therefore, for our safety, it is necessary to diversify providers.

The Energy Union is the European strategy with the intention of confronting the Russian energy power, searching for new territories that are able to feed the requirements of the EU. Its most important pillar is energy security and to fulfil that it is necessary to establish a diplomatic, infrastructural and financial offensive to intensify energy relations in the NAWA region.

The curse of abundance

But intensifying relations with NAWA has many direct consequences. For the exporting countries, it means perpetuating 1) some national budgets that are dependent on the sale of finite and polluting hydrocarbons; 2) some national and transnational elites that take the majority of the business; and 3) the de-industrialisation or the non-industrialisation of other sectors. The exporting states become the fee collectors, almost completely reliant on the income generated by the exportation of hydrocarbons. In the majority of cases, the population receives compensation by way of low fuel prices or subsidies on basic products. But they also endure the curse of abundance, rich territories with an impoverished population suffering from pollution, the depletion of water resources, displacement, subjugation and repression.

The most extreme case can be seen in the invasion of Iraq, which had the clear objective of controlling the Iraqi population’s hydrocarbons. Syria and Afghanistan, however, have some limited tested reserves but their strategic value lies in being transit areas. Afghanistan borders on Turkmenistan, a gigantic gas producer that could take advantage of Afghan territory to transport gas to China. The same goes for Iran, which, following the lifting of the embargo is activating their plans for the mass exportation of hydrocarbons. Elsewhere, Syria can facilitate the transit of Iraqi gas and oil to Turkey or towards its coast for exportation to Europe.

Beyond energy geopolitics, something that can be learnt about through reading, my work has allowed me to talk to people from NAWA and travel across their territories. “We are discriminated against, impoverished and we have no opportunities, while the transnational companies have spent more than 20 years earning millions in our region”, one Algerian told me, who is very active in the protests against fracking in the south of Algeria. The French company Total was the main interested party in using fracking in Algeria despite it being prohitied in France. “We have no water for our villages and we have to walk for more than three hours to get it!” lamented one man from Amazigh, near to Douz in the Tunisian desert. A few kilometres away, several North American and European companies are extracting hydrocarbons, consuming great quantities of natural water resources. In the same region, the swimming pools in hotel complexes are ready for tourists. “They have thrown the people of Mostorod out!” related one Egyptian lady faced with the forced displacement of the informal settlements near to the Mostorod refinery, 40km from Egypt. The extension of the refinery was carried out thanks to a loan from a European state-owned bank, the European Investment Bank.

These testimonies are just some of the examples that I am able to narrate in the first person. They are but a tiny part of the story of monopolization, pillaging and plundering which has a long track record and links us firmly with what is happening in Northern Africa and the Middle East. It is, of course, no coincidence that these testimonies are anonymous. Many of these people suffer repression by the national and transnational elites that are fed by the sale of hydrocarbons.

The current President of the European Council, Donald Tusk, uttered the infamous sentence “Wherever you are from: do not come to Europe”. Paradoxically, Tusk was one of the fathers of the Energy Union – that strategy that welcomes energy resources from the same countries as the refugees.  The security borders are, therefore, shaped according to interest. For refugees, the borders of Member States are shutting down and becoming impenetrable walls. However, for energy security, the borders are extending further and further, gathering territories in a clear exercise of energy neo-colonialism.

In the European context, the word colonialism or neo-colonialism seems to us to be something from the past or a term that is too harsh. The conversations with people from NAWA confirmed to me, however, that it is very present in their minds. And looking on the ground at how some European companies and institutions are acting, that does not surprise me.

My intention in writing this article was precisely to show, through the example of energy security, how this colonial dynamic is continuing. If we speak of the cause of the refugee “crisis”, we ought to broaden the focus and include a wider view, both in geographical space and time. Only by doing so will we be able to construct a tale that brings us closer to the reality of those villages on the southern shores of the Mediterranean and help us to radicalise solidarity with their current situation and suffering.